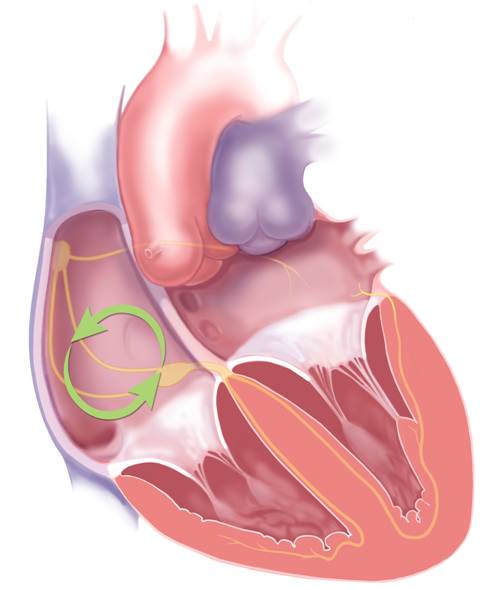 Supraventricular tachycardia can be found in healthy young children, in adolescents, and in some people with underlying heart disease. Most people who experience it live a normal life without restrictions.

Paroxysmal (also termed sporadic) supraventricular tachycardia usually occurs without other symptoms. However, it may be associated with a number of medical conditions, such as the following:
• Hardening of the arteries
• Heart Failure
• Thyroid Disease
• Chronic lung disease
• Pneumonia
• Pulmonary emboli, or blood clots migrating into the lung arteries from elsewhere in the body
• Pericarditis
• Certain drugs and social habits
• Cocaine abuse
• Alcohol abuse
• Smoking
• Drinking too much caffeine in coffee, tea, or soft drinks
• Emotional stress
• Pregnancy
• Structural abnormalities, such as Wolff-Parkinson-White (WPW) syndrome, in which extra electrical tissue sets up abnormal electrical circuits that predisposes the heart to arrhythmias which include PSVT, A fib, AF, and ventricular fibrillation

Symptoms may start and stop suddenly, and can last for a few minutes or several hours. A PSVT lasting more than half of the day is considered an incessant PSVT.
• Anxiety
•  Chest tightness
•  Palpitations (a sensation of feeling the heart beat)
•  Rapid pulse
•  Shortness of breath
• Dizziness
•  Fainting

A physical examination during a PSVT episode will show a rapid heart rate. The heart rate may be 150 to 250 beats per minute (bpm). In children, the heart rate tends to be very high. There may be signs of poor blood circulation such as lightheadedness. Between episodes of PSVT, the heart rate is normal (60 to 100 bpm).

An ECG during symptoms shows PSVT. An electrophysiology study (EPS) is often necessary for an accurate diagnosis and to recommend the best treatment.

Because of the sporadic nature of the PSVT, its diagnosis may require 24-hour Holter monitoring. For longer recording periods, a "loop recorder" (with computer memory) is used.

If you do not have symptoms, PSVT may not require treatment. If symptoms occur or if you have another heart disorder, treatment may be necessary. If you have an episode of PSVT, a technique called the Valsalva maneuver can be used to interrupt the fast heartbeat. Hold your breath and strain, as if you were trying to have a bowel movement, or cough while sitting with your upper body bent forward. Splashing ice water on the face has been reported by some people as helpful.

Emergency treatment of PSVT may include:
•  Electrical cardioversion, the use of electric shock to restore a rapid heartbeat back to normal.
•  Medicines through a vein, including adenosine and verapamil. Other medications may be used, such as procainamide, beta-blockers, and propafenone.

Long-term treatment of PSVT may include:
•  Daily medications such as propafenone, flecainide, moricizine, sotalol, and amiodarone.
•  Pacemakers to override the fast heartbeat; very occasionally used in children with PSVT who have not responded to any other treatment. •  Radiofrequency catheter ablation; currently the treatment of choice for most PSVTs.
•  Surgery to change the pathways in the heart that send electrical signals; this may be recommended in some cases for people who need other heart surgery.

PSVT is generally not life threatening, unless other heart disorders are present and the main complication is an increased risk of heart failure.

Heart Rhythm Specialists of South Florida gives special thanks to the National Library of Medicine, E-Medicine and National Heart Lung and Blood Institute whose Web sites aided in the research of the patient educational material provided above.