A pacemaker, also know as artificial pacemaker, permanent pacemaker or internal pacemaker is a small, battery-operated device that helps the heart beat regularly and at an appropriate rate.

A pacemaker generally has two parts:
Generator - contains the battery and the information to control the heartbeat
Leads - wires used to connect the heart to the generator and send the electrical impulses to the heart to tell it to beat

Today's generators weigh a little less than an ounce (30 grams). The pacemaker's battery can last about 7 to 8 years. It will be regularly checked by your doctor, and replaced when necessary.

A small cut is made, usually on the left side of the chest. The health care provider uses x-rays to place the wires (leads) in the heart. After the leads are in place, they are connected to the pacemaker. The pacemaker is placed into the chest area, and the skin around it is closed with stitches. Most patients go home within 1 day of the procedure. 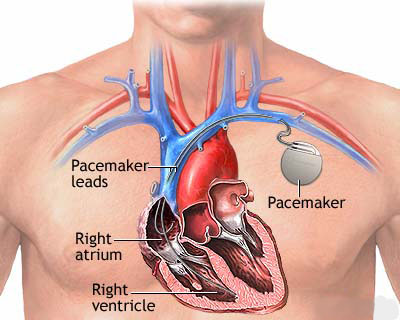 Complications of pacemaker surgery include but are not limited to bleeding, infection, dropped lung (uncommon), abnormal heart rhythms, and puncture of heart leading to bleeding around the heart (rare).

Why pacemakers are used

A pacemaker is often the treatment of choice for people who have a heart condition that causes their heart to beat too slowly (bradycardia).

Biventricular pacemakers have been used to treat severe heart failure.


The American Heart Association recommends that persons with a pacemaker should pay close attention to their surroundings to make sure there are not any devices that may interfere. You should always carry identification with you that says you have a pacemaker.

Heart Rhythm Specialists of South Florida gives special thanks to the National Library of Medicine, Wikipedia and National Heart Lung and Blood Institute whose Web sites aided in the research of the patient educational material provided above.